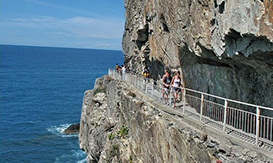 The most famous path of the Cinque Terre links Riomaggiore to Manarola; is a stretch of the longer Blue Trail crossing the coast of the Park. Via dell’Amore (the romantic name came later) was built, between 1920 and 1930, by the workers of the new railway line Genoa-La Spezia-Pisa.

The crib of Manarola 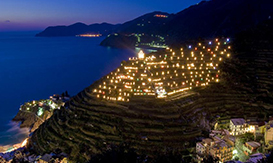 During the Christmas season Manarola offers a spectacle of great beauty. Little upstream of the center the lights of a nativity scene made up of about 300 sized images, made with recycled materials. Designed and built by Mario Andreoli, a local enthusiast, the Nativity continues to widening every year. 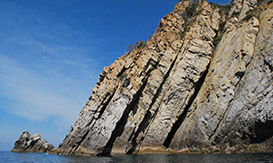 The coastline of the Cinque Terre is made up of sandstone, which is present with four geological formations and different form of the varied landscape. Between Monterosso and Punta del Persico prevails a boulder by the obvious stratification (the most striking are those along the Via dell’Amore), between Manarola and Montenero emerges a flysch formation called “Canetolo”, formed by shales intercalated with sandstone, marble and limestone. Around Punta del Persico appear shale polychrome. 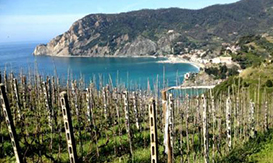 Eugenio Montale, one of the most famous modern poets Italian, spent his summers in Monterosso al Mare. From the time of Ossi di sepia, collection of poems published in 1925, the Nobel Prize in Literature received in 1975, the writer set in Monterosso “The house of the Customs officers”, Punta Mesco and various other works.

Among the symbols of the Cinque Terre there is also this rare wine. Sciacchetrà, a white raisin wine that is produced in the territory . In his preparation Bosco, Vermentino and Albarola, which are dried in closed and well ventilated shelters. Sciacchetrà has to be released after two or three years from harvest. 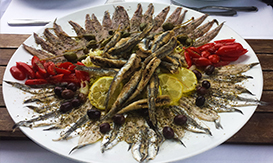 The specialties of the Cinque Terre are basic and simple dishes, which keep the flavors and tastes of the products of the territory. Fish is without a shadow of doubt the highlight of the Cinque Terre: bream, anchovies, squid, sea bass, octopus, cuttlefish and squid, grilled, fried or baked, but still tasty. All the specialties of the coast are always enhanced by herbs grown throughout the territory as marjoram, oregano and thyme, and enriched by genuine local olive oil. Very present in the Cinque Terre recipes also vegetables, often locally grown, which create delicious soups and dishes made with chard, borage, artichokes, cabbages, leeks and potatoes. Meat courses are few and limited to rabbits and poultry. We suggest that you accompany all dishes with fine 5 Terre DOC wine white and finish the meal with a glass of Sciacchetrà, the wine that the world envy.