Cinque Terre historical activities used to be agriculture, that designed the famous landscape terraced bands and fishing. At Cinque Terre cellars the smell of wine and fish was melted , as those locations were used to preserve anchovies, stored in small containers made of glass or pottery, pressed under salt, named “arbanelle”. The production of wine and gourmet recipes are a testimony local traditions, the way of life of the populations and the Cinque Terre, representing a concrete expression of the local culture. In our Landlord you can buy local selected products directly and even take guided tours at Producers. Our staff is also available for special packaging or shipping. 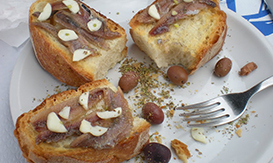 This is a Cinque Terre traditional dish with anchovies processed according to the old recipe of Monterosso al Mare. Known as “pan du ma” (bread of the sea) the anchovies are caught in the night with net and traditional method of lampara (a strong brilliant light that attracts fish), hand worked over during following two days. Careful layering, adequate pressing and accurate monitoring of quantity and quality of the brine, make anchovies tasty, also guaranteeing long duration. The resulting product retains all the aroma and flavor of freshly caught fish. Try it with olive oil, oregano and garlic for a great appetizer but also great as a main dish. 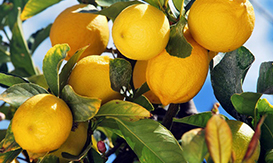 Lemons are cultivated within Cinque Terre since the seventeenth century. At the time known with the name of Citroni, today offer a great variety of derived products. This ancient food, symbol of the area, found a terrain and favorable climate, which allows a cultivation without the use of chemical additives. From this “gold of the Cinque Terre” are obtained jams, biscuits, tarts, cakes and “limoncino” the lemon liquor. 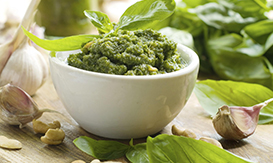 The pesto is a traditional sauce native of Liguria. His basic ingredient is basil (Ocimum basilicum). Besides the basil, are crushed raw garlic and pine nuts, all seasoned with parmesan, pecorino and extra virgin olive oil. Pesto is a sauce raw, a compound in which all the ingredients are blended cold, not cooked. For this characteristic ingredients do not lose any of its characteristics. The pesto used to flavor pasta dishes like potato gnocchi or trofie. 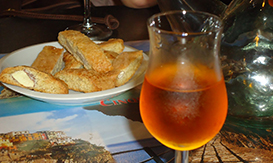 Sciacchetrà is a sweet wine, sweet and liqueur, produced in the Cinque Terre from grapes of Bosco, Vermentino and Albarola. If the origin of the name appears to be shrouded in mystery – for some comes from the Semitic “shekar” with which, in Palestine 3,000 years ago, were defined fermented beverages, for others the dialect verb “sciacàa” or “crush” used in this case to indicate the operation of crushing grapes – certain is the fine wine that has become the excellence symbol of Cinque Terre.
This rare wine has fruity floral fragrance, reminiscent of the essence of the Mediterranean: dried fruit, apricot jam, peach and vanilla, honey and spices. A warm color and intense: from golden yellow amber, tending to topaz. A sweet but never cloying, warm, bodied, velvety and mellow, well-balanced, with a pleasant and very light tannin. The average yield is 25 liters per 100 kg. of grapes – the grapes are left dry in the sun until November and are then shelled by hand to select only the best, very high quality also guaranteed by Designation of Origin (DOC since 1973 as the dry type). Sciacchetrà is a niche product, a divine nectar that can evolve for ten, twenty and even thirty years. This wine was loved by poets and writers, as Plinio, Boccaccio and Petrarca. Carducci described it as “the essence of all the Dionysian ecstasy” Giovanni Pascoli requested few bottles “in the name of literature Italian”, Gabriele D’Annunzio described it as “deeply sensual”. To fully understand Sciacchetrà means not only to appreciate the organoleptic qualities but also appreciate all the traditional knowledge related to the culture of the land. It means drinking a wine able to repeat with every sip a story about the centuries-old relationship, sometimes controversial between man and nature. 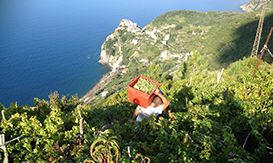 The old culture of wine has been for the Cinque Terre an element able to change deeply the territory. In the past, agriculture was the dominant activity in the area, directed especially to grow grapes and to make wine.
Some limited areas were cultivated olive and citrus, marginally some portions of land were destined to horticultural products. Tracts of land were covered by higher woods, providing wild fruits, specially chestnuts, wood and leaves were buried to fertilize the vineyard. The populations of the Cinque Terre derived their main livelihood from agriculture, bartering with their hinterland populations products and selling the wine in the nearby cities. A system such this has not held up the impact with the development of an industrial system in the neighbor, resulting in vineyard abandonment, decline of wine production and environmental deterioration. As of today, especially after the establishment of the National Park, efforts to recover the tradition of winemaking activity on the terraces of the Cinque Lands have produced good results, despite a hundred hectares today vineyard are not at all comparable to 1,400 a century ago. Cinque Terre territory is very difficult to cultivate for the geo-morphological conformation of the terrain not allowing effective mechanization, making it really very difficult for farmers. Recently, several monorails were installed since the eighties, being the unique agricultural machinery used.