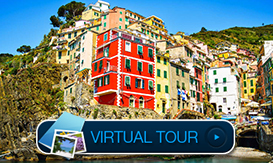 Caught between two steep terraced hills that descend to the sea in steep cliffs,the ancient village of Riomaggiore, strikes visitors with its houses built in vertical and delightfully colored, while walking through the alleys, vaults and stairs of the village, will be fascinated by the alternation of light and shadow. All the houses have two entrances: one on the facade at the level of the alley, the other on back up to the upper road. This structure, in 1500 guaranteed a street escape in case of attack by the Saracens. The first news on the territory of Riomaggiore date back to 1239, when the people of the district Carpena swore allegiance to Genoa, and when in 1251, the inhabitants of small halfway hamlets of Casen, Cacinagora, Saricò and Lemen decided to merge at the mouth of the “river” and found Riomaggiore.
In the nineteenth century, the country then inhabited by about 300 people, enchanted the painter Telemaco Signorini, leading member of the Macchiaioli current. As he was fascinated by this village you see in his paintings, in which he portrayed the dark and hidden dark corners of alleys, the widening and the shadows of the stairs. In the upper part of town you can visit the church of San Giovanni Battista, built in 1340 a basilica plan, with pillars in different styles, the two gates and the splendid gothic rose window fifteenth. In town worth a visit is the oratory of Santa Maria Assunta in 1500, the oratory Saint Anthony and the Oratory of San Rocco. The marina is surrounded by rows of medieval houses, based on the stone arches the old warehouses for wine, climbing on the slope up to the castle, overlooking the village. From there it goes on scuba diving in the clear blue sea waters of Marine Reserve. On the hill stands the sanctuary of Montenero, easily reachable from Riomaggiore through many paths. This is an extraordinary spot: on a clear day, the horizon, seem emerge from the sea the Tuscan islands and Corsica. From Riomaggiore to Manarola runs the Via dell’Amore, romantic walk engraved and carved into the rock, above the sea: natural window to enjoy sunsets and unforgettable starry skies. 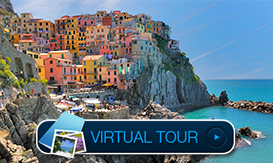 A picture of solar colors, a paradise of vineyards and olive trees, an ancient village where the houses seem to be born from the cliffs of long and narrow marina. The first historical evidence of Manarola belong tocsecond half of the thirteenth century and are related to the events of the family Fieschi of Lavagna. The latter has long been at war with the Republic of Genoa, were defeated in 1273 when the cavalier sent a fleet of 14 ships to counter the rebel Niccolò Fieschi, lord of the village. Under Genoa, the small village experienced progressive development, becoming a major producer, especially of wine and oil, and just in this agricultural tradition Manarola owes the origin of its name, and historians said to derive from a Manaraea dialect, before the current Manaaea, dating back to an ancient magna roea, ie magna rota, big wheel from watermill. In the low country, in fact you can still admire the old mill, restored by the National Park. Value for visiting is the church of San Lorenzo, in Gothic-Ligurian built in 1338, consists of three naves, with a Baroque interior barrel-vaulted, the Campanile Bianco square, ancient watchtower and defense, built in the fourteenth century, century Oratory of the Disciplined of Santissima Annunziata and the old Hospital of St. Rocco. 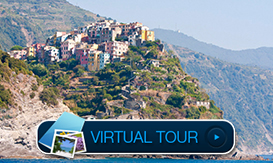 Only village of the Cinque Terre not in contact with the sea, is situated on a rocky promontory. Its houses, low and wide, more like those hinterland that to the typical coastal houses, indicating that the traditional vocation of the country is increasingly directed to land more than the coast. The most important monument of the village is the gotic Church of St. Peter, built around 1350 on the remains of a previous building. Her facade, embellished with a rose window, is enriched with many decorations, including a bas-relief depicting a deer, the symbol of the country. Interesting are the Oratory of the Disciplined, dating back to the eighteenth century and from which there is a breathtaking view of the sea, and the wide Taragio, the small main square of Corniglia, real heart of the village. 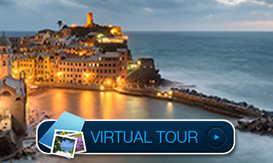 Considered by many the most charming of the Cinque Terre, Vernazza is documented for the first time in 1080. The remarkable economic and social level reached the village in the Middle Ages is still witnessed by urban structure and the presence of architectural elements of great value, such as lodges, churches, tower houses and porches. The town is dominated by the remains “castrum”, a series of medieval fortifications dating from the eleventh century, with a castle and a cylindrical tower. The town is made up of houses separated from a single main street and, perpendicularly, by steep stairways called “Arpaie”. The most important historical monument is Santa Margherita di Antioch, a Romanesque-Genoese style church, whose construction dates back to the thirteenth century, and a body in which are recognizable medieval and renaissance marks. 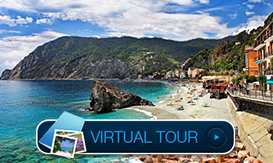 Monterosso al Mare is the largest village of the Cinque Terre and also to documented first (1056). Consisting of two settlements, the old village and Fegina, the more touristy, Monterosso al Mare has important monuments. These include the fourteenth century church of San Giovanni Battista, in front of which stoods the medieval Palazzo del Podesta, of which few traces remain. Of great importance on the Cappuccini hill, the castle of the Fieschi and the monastery with church dedicated to St. Francis, contains works of art of inestimable value, including paintings attributed to Van Dick, Cambiaso, Piola and Guido Reni. At Fegina are recommended Villa Montale, where the Nobel Prize for Literature spent long time and the Gigante, an imposing statue of reinforced concrete built in the early twentieth century which, originally, was holding on his shoulders a terrace-shaped shell.